For 500 years, anecdotal evidence has strongly suggested a genetic link between the hairless trait and incomplete dentition even though this idea defies conventional dog breeding wisdom. A traditional view tells us that selective breeding should produce steady improvement and the eradication of perceived faults.

It is therefore easy to dismiss the continued appearance of incomplete dentition as mere sloppy, careless breeding. But experienced breeders will admit that this trait regularly appears despite the best efforts to select against it. The gene responsible for the hairless trait is now identified as FOXI3. Although its exact function is not yet completely understood, we know that the protein encoded by this mutation activates development of hair and teeth.

Breeders new to the breed might believe that breeding a Powderpuff to a hairless Chinese Crested will correct or improve dentition, this theory is proven untrue.

Most hairless are lacking premolars. Some have incomplete incisors and primitive looking canine teeth. Some hairless also possess completely normal dentition. Incomplete dentition is a variable trait. It is not a sign of breed purity. 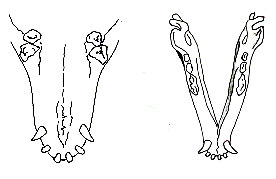 Left: Level bite with missing incisors, teeth are uniformly placed.
Middle: Mouth is missing adult canine and incisor.
Right: Reverse scissor with all front teeth, but has retained baby canines and will never get adult ones. Most likely, if they ware well rooted, they could last the life of the dog.


In some mouths, if the bottom canines are large they will push the teeth forward. If the top canines are only baby ones, there is nothing to move the adult incisors forward. Many of the front teeth in Cresteds point forward, not just the tusk-like canines. Then, add that the mouths continuously move in these guys. In every Crested, this may stop at 2 years, 4 years, or slowly and almost unnoticeably keep changing throughout their life.

The teeth of the Hairless variety can differ in shape from those in a normal mouth. The canines are often (but not always) conical and point forward; these are referred to as tusks. This is a characteristic which applies to both good and bad “Hairless” mouths.

The shape of the incisors can vary considerably. Some are no more than little pegs protruding from the gums. Others are almost normal. Sometimes a full complement of narrow “pegs” can look as though they have been thrown in haphazardly. The number of teeth present can also vary. In the worst example, many may be missing, having never been present at all.

Occasionally, milk teeth which showed great promise are not replaced with adult teeth; and where milk teeth have been missing, adult teeth can appear! The teeth that are present can be poorly rooted. For example, incisors may point forward like tusks, but may fall out at an early age. Pre-molars will be missing from the Hairless variety – one, two, or maybe all of them. Even a good Hairless mouth may be without first and second pre-molars, and this should be accepted as normal. Tusks and missing pre-molars are not mentioned in the Standard, but these characteristics should be acknowledged as typical of the Hairless mouth. Some Hairless retain their teeth most of their life – the hairless gene expresses itself in various degrees with dentition and coat density/placement.

Undershot, overshot and wry bites are not linked to the hairless trait. Misalignment can be more difficult to assess if several teeth are missing but it will affect the dog’s expression regardless of the presence or absence of teeth.

When judging both varieties, emphasis should be placed on expression, structure, balance and movement. Since the Powderpuff variety does not carry the hairless gene, full and normal dentition is expected. The Hairless should not be penalized for lack of dentition.