The Genetic Mutation that Causes Hairless Dogs
by Linda Landon

Scientists have discovered a gene mutation that causes hairlessness in dogs. The discovery may help cure a genetic disease in humans. Dogs may truly be man's best friend.

Hairlessness results from a genetic mutation in the dog’s DNA. Scientists used DNA from Chinese Crested Dogs, to discover the mutated gene. Scientists discovered that the mutated gene was the blueprint for a protein that binds to DNA, which then controls the production of other proteins. The changes caused by the DNA mutation subsequently cause the dog to be hairless.

Hairless dogs must have one good copy of the gene to be born and survive.

Pups with two mutated gene copies die before birth. This explains why breeders have not eliminated the coated variants of hairless breeds. All living hairless dogs must have one healthy gene copy to survive. The dogs must pass along the healthy gene in order for their offspring to survive.

Since hairlessness and bad teeth always occur together and because at least one healthy copy of the gene is necessary for life, the scientists have concluded that the mutated gene plays an important role in the development of the body, which is most obviously seen in the hair and teeth. A human syndrome called ectodermal dysplasia causes people to have a condition very similar to that of hairless dogs.

Ectodermal dysplasia is a genetic disease caused by 150 different mutations in human DNA and occurs in both males and females of all races and ethnic groups. Children born with ectodermal dysplasia have malformed teeth and extremely sparse hair. The severity of the disease depends upon which mutation the child inherits.

Scientists seized the opportunity to study the similar mutation in dogs in order to gain understanding of the condition in humans. Knowledge gained from the dog might provide insights into how to cure or prevent ectodermal dysplasia. If this is true, dogs may be found to be a better “man’s best friend” than man ever knew.

The Powder Puff doesn't carry the hairless (Hr)gene, only the gene for coat (hr), thus the Powder Puff is referred to as (hrhr). This combination is not lethal. 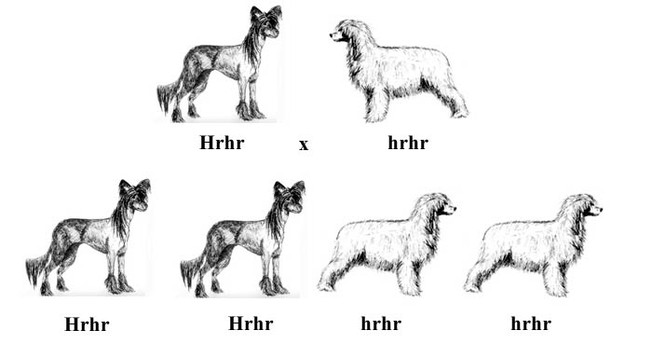 Mating a Hairless (Hrhr) to a Powder Puff (hrhr) would net the following avarage results:
1. (Hrhr)  (50%) - Heterozygous Hairlesses
2. (hrhr)   (50%) - Homozygous Powder Puffs
But this mating could produce all Hairlesses (Hrhr) or all Powder Puffs (hrhr) or any combination.

Current research of expression of hairlessness

A team of European scientists, led by Tosso Leeb of the University of Berne in Switzerland, had been searching for years for the genetic roots of the Chinese crested’s hairlessness and its abnormal dentition.

Recent research has finally revealed that the hairless mutation results from the insertion of seven letters of genetic code, named FOXI3, into a gene on chromosome 17. This error turns a coated dog into a hairless. Analysis of DNA samples from 140 hairless dogs (Xolos, Peruvian Inca Orchids and Chinese Cresteds) and 87 coated dogs confirmed that every coated dog in the study lacked the mutation, and every hairless dog possessed one copy. Researchers were unable to find a single instance of a matched pair of genes containing this seven letter DNA duplication.

Genetic test for hairlessness is now available... Due to this test they can now find out wether a dog is a puff or a hairless, no more doubting !
But they want to take it further, they want to find out which genes are responsible for the amount of hair in our dogs. Why for example  when we breed two true hairless, we still get hairy hairless in the litter.

For that Theresa-Bernadette Mausberg at the University in Bern needs more bloodsamples. This is her contact address:

A mutation responsible for 'furnishings' or 'satin' coat in dogs has recently been identified in the RSPO2 gene. Furnishings refer to the variation of longer facial hair seen in all wire haired breeds as well as some others. This finding was the result of an extensive collaborative effort by researchers from a number of universities and the National Human Genome Research Institute (NIH). The work was published by Cadieu et al. in the journal, Science (www.sciencexpress.org/27August 2009/Page2/10.1126/science.1177808), and the test offered here is based on that work. The mutation is dominant, so in breeds where the coat can vary, it is possible for a furnished dog to carry the 'unfurnished' trait (called satin by some).
http://www.vetgen.com/canine-furnished-coat.html